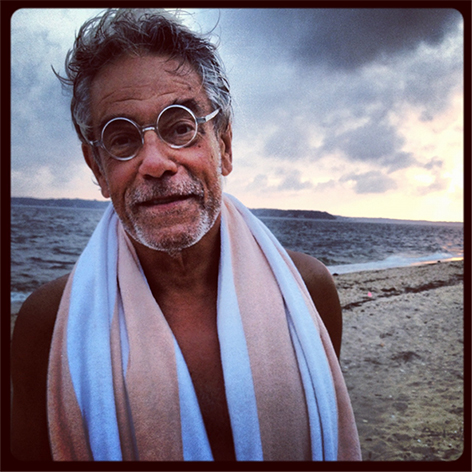 From the very earliest days of photography,  photographers have been ineluctably drawn to the human face. Riding the crest of a twenty-five year career that saw several lifetimes worth of industry awards and commissions, Michael O’Neill was feeling this pull on an almost visceral level. So, abruptly calling it quits he underwent over the course of the next five years, what could be called a radical ‘genre transplant’. As one the most respected photographers of his time in the exacting art of commercial and editorial still-life, he wanted a practice based on an empathy between subject and photographer and began his career anew as portrait photographer.

Having come up in the late 60s in the orbit of Avedon, Hiro, Penn, and Karsch–through a sort of ‘guild’ system, that is, where the collective memory of his mentors linked him directly back to Steichen, Hoyninguen-Huene, Horst, Beaton and Brodovitch–O’Neill did have an intuitive grasp of how to approach his sitters. Early subjects were Andy Warhol and Richard Nixon, who left O’Neill stunned with a spontaneous humanity totally at odds with his image as a total pariah of the American left. He has photographed every American president since.

Through the next decades O’Neill was a contributing photographer for the New York Times Magazine for eighteen years, Rolling Stone, Life, the New Yorker, Esquire, Vanity Fair, Time and numerous other publications, producing iconic photos of the famous personalities of the late twentieth century. In time the work he produced in his adopted genre of portraiture received acclaim equal to that in his previous life as an advertising and commercial artist.

O’Neill’s portraits keep artifice to a bare minimum. They have the restrained classicism of formal portraiture yet succeed in keeping even the most well-known faces rooted in a factual and psychological here and now. In this way O’Neill subdues their sheer familiarity, lest their fame overflow the images themselves. Making no concessions to formula, and remaining open enough to let the strength of a sitter’s personality have its effect on the appearance of image, he captures those at the highest pinnacles of fame simply enacting the role of themselves.

Ironically, in one of his most popular projects, O’Neill turned his lens not on people but on young animals. Inspired by natural histories and drawings in the Columbia Encyclopedias he read as a kid, he started the Zoobabies project  in 1991 (with a book published by Villard  the same year). Translating his fascination with human physiognomy into an exploration of the oh-so-human tendency to anthropomorphize the faces of animals, O’Neill produced images that have been delighting viewers for over twenty years.

The project closest to O’Neill’s heart, though, and one that will continue to occupy him far into the future, is an exploration in word and image of the origins and the essence of yoga and Eastern spiritual practice through an ongoing series of portraits. On the heels of a photographic career that was occupied first with the physiognomy of objects as a still-life photographer; then of many guises of fame and celebrity, O’Neill is now searching for the physiognomy of wisdom and of compassion in the faces and in the comportment of the great gurus and teachers in these ancient traditions.